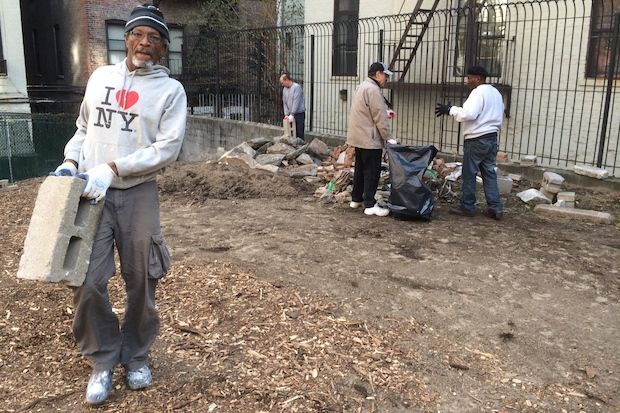 In October residents volunteered to clean up Morningside Height's Electric Ladybug Garden  located at 239-37 West 111 St. in Morningside Heights. They started clearing it out two years ago after being vacant for three decades. Nine of the gardens slated for development under De Blasio's affordable housing plan are in Brooklyn and six are in Manhattan.  (Photo: electricladybuggarden.org via DNAinfo)

At least 15 community gardens on city-owned property could be bulldozed to make way for new buildings under the de Blasio administration's affordable housing plan, community advocates said, according to DNA info.
The Department of Housing Preservation and Development published a list this week of city-owned sites that housing developers can apply to build on, shocking those who tend to and enjoy the green spaces.
Developers were asked to submit proposals for nearly 180 sites — which could include rentals for families earning nearly $140,000 a year and paying $3,000 in rent — by Feb. 19. 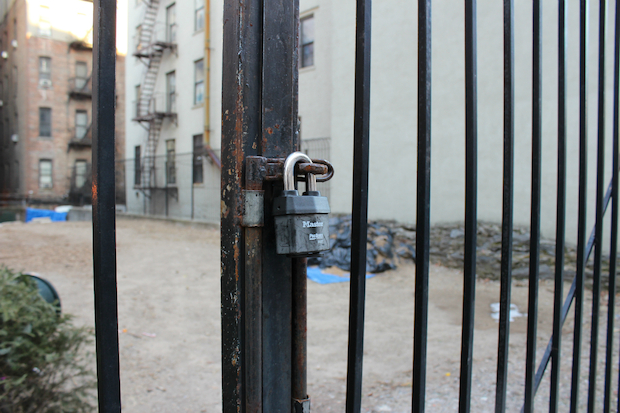 Locked garden - January 15, 2014. Residents were looking forward to planting this spring. The garden is now on a list of city-owned sites that could be developed under the city's affordable housing plan.  (Photo: Sybile Penhirin/DNAInfo)

John McBride, one of the residents who helped Morningside Heights' Electric Ladybug Garden get off the ground, was surprised Thursday when he found the city had already padlocked his block's space.
"We were just getting ready to start planting for the spring and now it's padlocked," said McBride, 46, who was part of a two-year labor-intensive effort to clear rubble from the vacant lot on his West 111th Street block and replace it with clean topsoil from the Parks Department's Green Thumb this summer.
McBride said he understood the de Blasio administration's "huge commitment to housing," but he didn't understand why the city was targeting lots with flourishing gardens when it owned other parcels of land that were sitting truly fallow.
Of more than 1,000 HPD-owned vacant lots, approximately 74 have community gardens, according to research from 596 Acres, the nonprofit that helped provide technical support to transform Electric Ladybug.
Nine of the gardens slated for development are in Brooklyn and six are in Manhattan. They range from spots like East Harlem's Jackie Robinson Community Garden, which has been around for more than 20 years, to Williamsburg's La Casista Verde, which opened in September.
"We're not in denial about the terms of the use [since the garden sits on HPD land]," McBride said.
"What we're reacting to is a sense of misplaced priority.  It would be so easy to avoid affecting these gardens when you look at HPD's inventory.
"This garden has allowed people to create a sense of community where it didn't exist before between the old timers and the newcomers. I think people are surprised at how quickly the garden has flourished. It's really given the block a positive tone."