Hundreds Gather In Washington Sq. Park In Support Of France After Terrorist Attacks 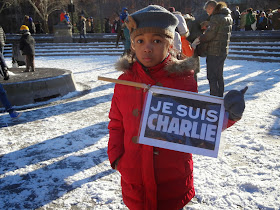 A young girl stands in the snow-covered fountain in Washington Square Park holding a sign that reads in French "Je Suis Charlie" (I am Charlie),  a slogan adopted by supporters after the January 7, terror attack at the offices of the French satirical newspaper Charlie Hebdo in Paris.  Hundreds of people gathered in the park on Saturday in solidarity to pay tribute to the victims of the terrorist attacks in France this week. The deadly actions began on Wednesday when two masked Islamic extremists targeted the publication and slaughtered twelve people.  Five more innocent victims were killed by Friday.   (Photos:  Geoffrey Croft/NYC Parks Advocates) Click on images to enlarge

Once again a city park played an important role in allowing the public to greive, share, pay respects and come together after a tragedy.

Hundreds of people gathered in Washington Square Park on Saturday for an emotional tribute in support of the people of France who suffered horrifically this week.

The touching event attracted people of all ages and nationalities.

Many waved hand made signs and uttered,  "Je suis Charlie,” and it's English translation,  "I am Charlie," and "Vive la liberté!" while others held up pens and pencils symbolizing the fight for freedom of speech against terrorism and oppression. 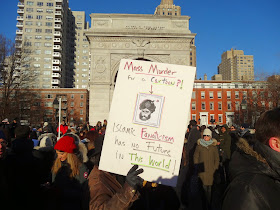 One attendee carried a sign which read, Mass Murder for a Cartoon?! Islamic Fanaticism has no Future in This World!

The crowd came out to protest the barbaric terrorist attack that left seventeen innocent people dead this week in France including police officers and cartoonists at a Parisian-based satirical magazine.

On Wednesday two masked Islamic extremist brothers burst into the offices of Charlie Hebdoand  in Paris and slaughtered 12 people including the publication's top editor, several cartoonists, an office visitor, a janitor and two police officers before fleeing.

The terror spree continued over the following days resulting in the killing of a female police officer on Thursday and the murder of four innocent civilians on Friday.
The terrorists wounded another 20 people over the three days.

The suspects were killed by police on Friday following a massive three-day manhunt.  The terrorists were killed in a printing warehouse. An associate, who killed an unarmed female officer with his girlfriend,  was shot dead in a Paris kosher deli after he killed four people. The search for the terror suspect's accomplice girlfriend continues.

Saturday's tribute was reflective and defiant.

Many people held  "Je suis Charlie," (I am Charlie)  signs a slogan adopted by supporters after the January 7th attack at Charlie Hebdo in Paris.

Another held a sign which read,  "Mass Murder for a Cartoon?! Islamic Fanaticism has no Future in This World!

The event was promoted on social media.

Charlie Hebdo will publish its next edition on Wednesday with a print run of 1 million, seventeen times their normal run. 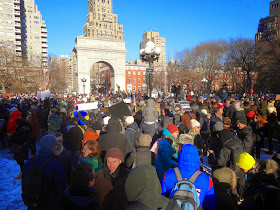 Hundreds of people gathered in Washington Sq. Park  in New York's Washington Square Park on Saturday in solidarity with victims of terrorist attacks in Paris, another on a female police officer, and another at a kosher market.

On Sunday more than a million people gathered in the streets of Paris in what was reported as the biggest rally in French history.   Parisian authorities said 3.7 million people demonstrated nationwide.  Tens of thousands of people rallied worldwide.

The bond between America's oldest ally France runs deep. The French general and American Revolutionary War hero Marquis de Lafayette (1757–1834) was appointed Major General in the Continental Army during 1777 by George Washngton.  Lafayette lead American troops in the battle for the nation’s independence from Great Britain. His contributions to many of the freedoms we know today are well represented by several permanent memorials in our city parks.

A larger-than-life-sized statue of Lafayette in Union Square Park was sculpted by Frédéric-Auguste Bartholdi of Statue of Liberty fame.  Bartholdi's would go on to create another Lafayette monument "Lafayette and Washington," the centerpiece of Lafayette triangle in Morningside Heights at 114th Street.  (The original statue was dedicated in Paris in 1895)
Another can be found in Prospect Park.

These memorials stand as lasting tributes to Lafayette's tireless fight for democracy, independence and religious freedom for both the people of America and his native France. 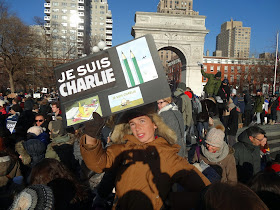 A young boy holds up a sign with a selection of cartoons. 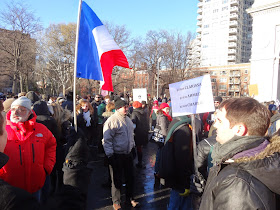 Je suis Clarissa,  Je suis Ahmed, Je suis Charlie. An attendee waves a French flag as his friend holds a placard with the names of three people murdered this week including two police officers. The sign pays tribute to Clarissa Jean-Philippe an unarmed female police officer who was gunned down on Thursday while directing traffic in Montrouge, south of Paris;  And Ahmed Merabet, a Muslim and one of two officers killed in the Charlie Hebdo massacre. 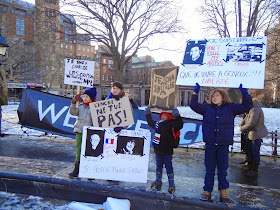 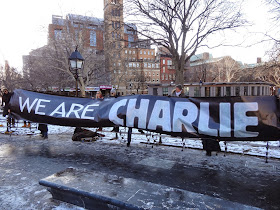 An enormouse We Are Charlie sign was unfurled in the park. 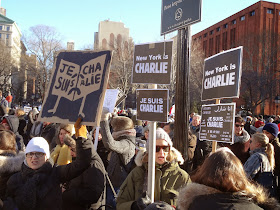 Signs of the times. 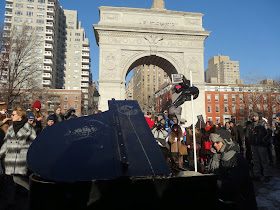 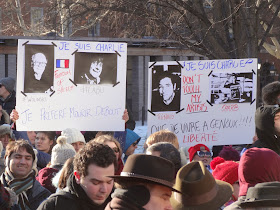 Signs paying tribute to some of those killed at the French satirical newspaper Charlie Hebdo. 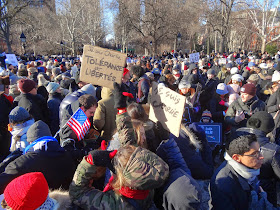